10 must visit places in Kalimpong

There are several ways to reach Kalimpong 10 must-visit places in Kalimpong.

By Air: The nearest airport is Bagdogra Airport. Located around 80 km from Kalimpong. From the airport, you can hire a taxi or take a bus to reach Kalimpong. Taxi rent is around Rs 4500

By Bus: Kalimpong is well connected by road and there are regular bus services from siliguri .

By Car: If you are traveling by car, you can take the National Highway 12 and then take the state highway to reach Kalimpong.

Kalimpong a small city surrounded by clouds. The city is located about 66 km from siliguri at an altitude of 1200 meters. Kalimpong was once the center of trans-Himalayan trade between India and Tibet.

Check out this list of the best places to visit in Kalimpong.

Tharpa Choling Monastery, also known as Tharpa Choeling Gompa, is a Tibetan Buddhist monastery located in Kalimpong, West Bengal, India. It was founded in the early 20th century by the late Khamtrul Rinpoche, a prominent teacher in the Drukpa Kagyu tradition of Tibetan Buddhism.

Monastery is known for its beautiful architecture, intricate frescoes, and traditional Tibetan-style murals. It is home to a large number of resident monks, who engage in daily prayers and rituals, as well as study and meditation. The monastery also offers teachings and initiations to laypeople and visitors.

The monastery is open to visitors and can be reached by taking a short walk from the main market area of Kalimpong. The monastery is a great place to visit for anyone interested in Tibetan Buddhism, culture, and architecture.

Firstly,10 Must Visit Places In Kalimpong Morgan House in Kalimpong, West Bengal, India, was built in the early 20th century by a Scottish man named David MacIntyre, also known as Morgan. It was originally used as a private residence but was later converted into a hotel. During the British Raj, it was used as a retreat for British officials and was also a popular spot for tea planters.

After India’s independence in 1947, the house was abandoned and fell into disrepair. In the 1990s, it was restored and converted into a heritage hotel. The house has since been declared a heritage building by the government of West Bengal and is protected under the West Bengal Heritage Commission Act.

It is known for its colonial architecture, which features a mix of Scottish and Bhutanese styles, and for its scenic views of the surrounding mountains.

Secondly,the Jung Dag Palri Pho Brang Monastery, also known as the “Palace of the Glorious Copper-Coloured Mountain. It was built in the early 20th century by the 9th Karmapa, Wangchuk Dorje (1886-1952.

The monastery was built as a replica of the Karmapa’s seat in Tibet. It is also a major center for the study and practice of Buddhism in the region.

The monastery is known for its intricate and colorful murals and statues, which depict various aspects of Buddhism.

Thirdly,10 Must Visit Places In Kalimpong. Neora Valley National Park was established in 1986 and covers an area of 88 square kilometers. It is situated in the foothills of the Himalayas and is known for its diverse range of flora and fauna.

The park is situated in an area that has been traditionally inhabited by the Lepcha and Bhutia tribes. It is also home to many rare and endangered species, including the clouded leopard, the red panda. The park is also known for its wide variety of birds, including the black eagle.

The park’s vegetation ranges from tropical forests to alpine meadows, with a wide variety of plants, including orchids, rhododendrons. The park is also home to a wide variety of medicinal plants. Which are used by local people for traditional medicine.

The park is also famous for its trekking routes, which are popular among tourists and adventure enthusiasts. The park provides an opportunity for visitors to explore the natural beauty of the region .

Fourthly, 10 Must-Visit Places In Kalimpong Dello Hill. Delol is a hill located in the town of Kalimpong, in the Indian state of West Bengal. It is known for its panoramic views of the surrounding mountains and valleys, and is a popular tourist spot.

The hill has been a popular spot for tourists for many decades, and is known for its scenic beauty. The hill is surrounded by lush green forests and is home to many species of birds and other wildlife.

Dello Hill is also famous for the annual Dello Hill Festival which is held every year. It is considered as an attraction of the town

The Lepcha Museum, also known as the Lepcha Heritage Museum, is a cultural museum located in Kalimpong, West Bengal, India. Established in the year 2000, and is dedicated to preserving and showcasing the culture and heritage of Lepcha people.

The museum is located in the Lepcha Heritage Centre.Which was established by the Lepcha community in order to preserve and promote their culture. The museum features a variety of exhibits, including traditional clothing, jewelry, tools, and household items. As well as photographs and other artifacts that illustrate the history and culture of the Lepcha people.

The museum also includes a research library.Which houses a collection of books and other materials on the Lepcha people and their culture. The library is open to researchers and the public, and is a valuable resource for those interested in the history.

The museum is an important institution for the preservation of Lepcha culture and heritage.And is visited by many tourists, researchers and students interested in learning about the indigenous culture of the region.

Lava and Lolegaon are two small towns located in the Darjeeling district of West Bengal, India. They are situated in the foothills of the Himalayas and are known for their natural beauty and scenic views.

Lava is located about 80 km from Darjeeling, and is known for its thick forests, beautiful waterfalls, and tranquil atmosphere. The town is surrounded by a number of trekking routes, which are popular among tourists and adventure enthusiasts. The most popular attraction of Lava is the Neora Valley National Park. Park is known for its diverse range of flora and fauna, as well as its scenic beauty.

Lolegaon is located about 30 km from Lava, and is known for its beautiful views of the Himalayan Mountains. The town is surrounded by forests and is home to a number of small villages and hamlets. The main attraction in Lolegaon is the Jhandidara View Point, which offers a panoramic view of the Himalayas.

Both Lava and Lolegaon are popular tourist destinations, known for their natural beauty, trekking routes, and peaceful atmosphere. They are also considered as offbeat destinations and are becoming popular among the tourists.

10 Must Visit Places In Kalimpong

10 Must Visit Places In Kalimpong.Pedong is located around 42 km from Kalimpong and is known for its natural beauty and scenic views. Pedong is situated on a hill, and is surrounded by lush green forests and tea gardens.

The town is known for its picturesque location, surrounded by the Himalayan Mountains, and is a popular destination for nature lovers and adventure enthusiasts. Pedong is situated on the ancient Silk Route .

The town is also home to a number of historical sites, including the Pedong Monastery and the Pedong Church. The town is also known for its festivals, particularly the Maghey Sankranti Mela, which is celebrated in January every year.

10 Must Visit Places In Kalimpong Pedong is becoming increasingly popular among tourists, as an offbeat and less-crowded destination. It is also a good place to explore the local culture and tradition, especially of the ethnic communities 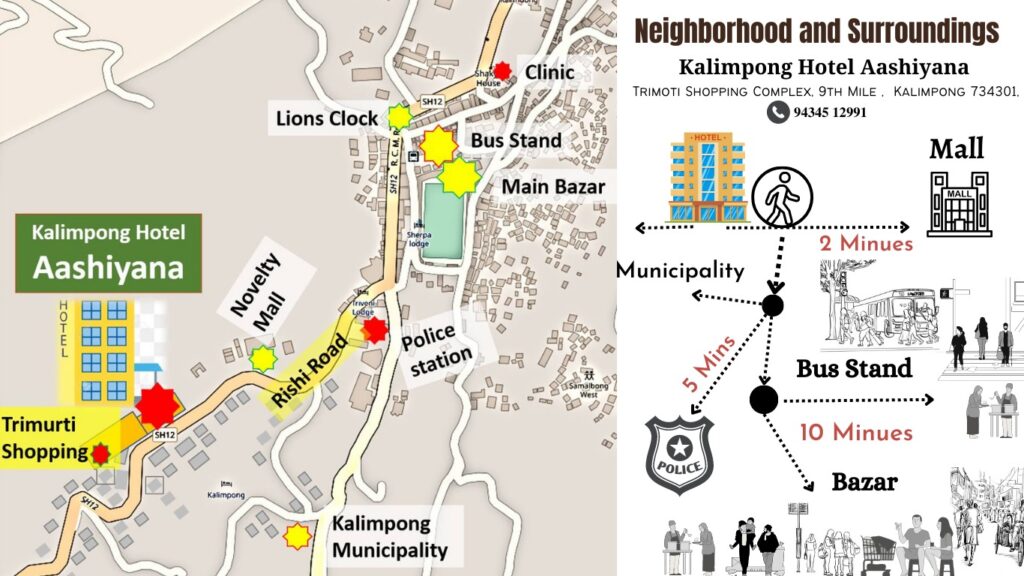